"And I beheld another beast coming up out of the earth; and he had two horns like a lamb and he spake as a dragon" Rev 13:11

For the past two hundred years historicists have agreed to disagree on the identity of the second beast of revelation 13. It was either the Jesuits or America. Those two views became one in 1992 when the N.W.O. was officially begun and a Jesuit became president of the United States. The two horns can now be seen to be a prophecy that the United States will divide.

The significance of these two horns becomes apparent when you consider how arms, horns, legs and toes have been used in the extended prophecies of the seven beasts of the Apocalypse. 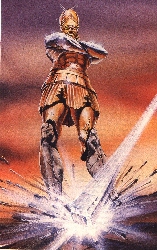 The first beast was the lion or Babylon represented as a head of Gold. It fell to a second beast which had two horns. These two horns which corresponded to the two arms of the metal man represented the combined Kingdom of the Medes and the Persians. The metal man is always pictured with arms folded.

Then a third leopard beast representing Greece had a notable horn which represented Alexander but four horns emerged when the notable was broken. This represented the four part division of the empire upon his death.

The fourth beast arises represented by the legs of the metal man. And consistent with the language of prophecy these two legs anticipated the division of the Roman Empire into East and West. This beast had ten horns which were a prophecy that it would be shattered into ten kingdoms. These ten horns are identified as ten kingdoms in Daniel 7:24. They correspond to the ten toes of the metal man in Daniel 2:41.

Then three toes were plucked up and a little horn emerged in their place which represented the sea beast of revelation, the Holy Roman Empire with the Papacy as the little horn.

The pit beast has no horns, a fact that is pregnant with meaning for a power that has no territory and no visible head. Illuminati, masonic communism has always been a subterranean power and its rules with a hidden hand.

And now we come to the final beast, the land beast with two horns. In the context of bible prophecy, these two horns could only mean that this last beast will divide into two parts in the end.

But John wasn't the only prophet to see America divide.