The vial judgements are patterned after the plagues in Exodus. It is not a one to one correspondence but, the sores of the first vial, the blood of the second, the darkness of the fifth and the hail of the seventh vial establish the pattern. And after the sixth vial there were three frogs.

The plagues were directed against the gods of Egypt. The frog goddess, Hecate, was one of their principle deities. Hecate was a triple goddess. She performed her magic at crossroads, where three ways meet.

As a result, the goddess of crossroads has three faces, one looking each way. The word trivial is a Roman word that refers to Hecate Tri Via (three ways). She is also represented as an equilateral triangle.

On another level, Hecate was the third stage in the life of the mother goddess. These three phases are represented by the moon. Crescent waxing, the beautiful virgin goddess. Full moon, the maid. And crescent waning, the old maid or crone. The word hag is a variant of Heka from Hecate.

representation of this old egyptian goddess. The goddess of course is Semeramis, the goddess of a thousand names, Babylon's queen who is riding the scarlet beast. (Rev 17:3)

The fact that toads or frogs are associated with witchcraft proceeds from the old legends of the frog goddess.

The illuminati masonic pit beast is the focus of the vial judgements. And both the illuminati and masonry are based upon the ancient egyptian mysteries which point to the triple frog goddess.

E.B. Elliot discovered that the original arms of France were a banner with three black toads or frogs. Clovis, king of the

Franks converted to Christianity and changed the flag from three frogs to the familiar fleur de lis. The french do not like to be called frogs so their histories of the fleur de lis don't mention this fact.

Elliott reveals that the three frogs came from an egyptian medal. This would have to be a symbolic representation of their triple frog goddess, the dark goddess, Hecate.

The Illuminati was founded by a witch and has always been involved in witchcraft. And Masonry is essentially Baal worship or satanism when the layers of symbolism are stripped away. And this end time beast emerged in France.

The three frogs then are a powerful symbol representing the end time 8th beast which emerged from a witches coven and erupted during the French Revolution. And the old witch goddess Hecate is brewing up a witches caldron where the three beasts meet in the New World Order. 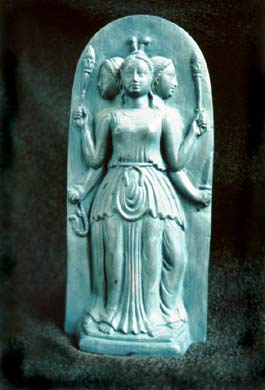