"For I will gather all nations against Jerusalem to battle" Zechariah 14:2

Like other prophets, Zechariah blends prophecies of the present, near future and final days into one sweeping panorama. After writing about the Jerusalem of his day in the first 11 chapters, his eyes look to the dramatic conclusion in chapters 12-14.

In chapter 14 he sees all the armies of the world surrounding Jerusalem. But earlier in Chapter 2:4 he reveals that in the end Jerusalem would be many towns without walls for the multitude of men and cattle therein. Jerusalem is a single city with 12 gates and walls and no cattle. 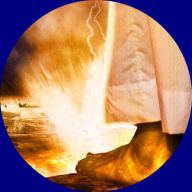 We have learned that earthquakes in the language of prophecy are symbolic so lets get the 'rest of the story' in Zechariah 14. The chapter opens by declaring that in the Day of the Lord all nations gather against Israel in new jerUSAlem and attack. Half the city falls, women are ravished and great spoil is taken.

Then the Lord stands on Mt. Olive(figuratively) and "new" Jerusalem splits into north and south in a great political revolution (earthquake). Then the Lord goes forth to fight the nations. The terrible verse in Zechariah 14:12 implies a nuclear attack. "The enemies of the Lord have their flesh consume away while they are on their feet. (14:12)

Will the Lord be fighting for the north or the south? Ezekiel provides the answer.